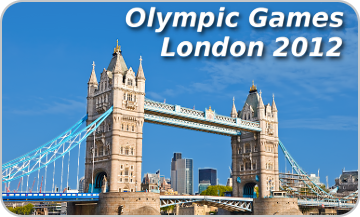 Oussama Mellouli, the California-based Tunisian who claimed the 1500m freestyle crown in Beijing, today became the first swimmer ever to win Olympic titles in pool and open water - and the first to win medals in both at the same Games - when he crushed the opposition in the 10km marathon in 1 hour 49mins 55.1sec.

The silver in The Serpentine in Hyde Park went to Thomas Lurz, of Germany, 3.4sec back, the bronze to Canadian Richard Weinberger 5.2sec from gold. The medal winners were well clear for the medals, Liverpool-born world 10km champion Spyridon Giannotis, who started the Torch Relay for London 2012 in his native Greece, finishing fourth a further 5sec back.

Britain's Daniel Fogg, after having slumped to 22nd on the fourth lap rallied over the last 1.5km to finished a worthy fifth 37sec away from the podium at the helm of the second wave of finishers in what was only the fourth 10km swim of his career.

Mellouli indicated that he would now retire after setting the new distance double as a target for others to strive for: 1500m and the 10km. Asked if he would now move on, he said: "I don't know. There's no way I can top this achievement. Today I became the first to get medals in the pool and open water. There's no better way than this to leave it all behind me and just enjoy life."

He described his voyage through swimming in the United States as having been "truly amazing", the coaching philosophies of Schubert and Salo wide apart but both serving him well.

Of Salo, he added: "We drifted apart in the last year on philosophy as far as what it takes to [be at your best] but Dave is someone who listens to swimmers feedback and we worked on it."

For his open water adventure he hired the survives of Vogt. "I learned a lot from her in the last eight months. She's been a great addition to my staff," said Mellouli, Vogt smiling in the wings. That kind of mixture of different philosophies and schools of of thought andy that's why I managed this incredible double."

Success meant all the more because of the turmoil that injury had brought to Mellouli's life, the champion said. "Only those closet to me known how much of a struggle it has been to get here today." He listed back and shoulder injuries and the interruption they had caused to his preparations.

Asked if pool or open water was toughest, he replied: "Open water is by far the most difficult. That was hell. There's no other way to describe it. I remember vividly the last 400m I looked up to the finish line … my shoulders were so heavy, my legs tight and my lungs burning. My whole system was in shock for the last 5 minutes of the race. It was pure hell. It's what a a marathon runner goes through but even more painful than that. People could argue that the 10k is one of the most difficult races of all."

Having led for much of the first of six laps before settling into the pace of the lead shoal, Mellouli, coached by Dave Salo at the Trojan club in Californian, timed his move to perfection: just before the end of the penultimate lap of six the first Arab swimmer ever to win a world title - one he would then lose after producing a positive test in 2007 - surged ahead to establish a lead of almost 3sec over Lurz.

Within 400m, the African had a 7sec advantage on rivals with 1500m to go, a lead that surely meant that Mellouli could not lose: last Saturday he took bronze in the defence of the 1500m freestyle crown, which passed to China's Sun Yang in world-record time. Mellouli had raced over 10km just one 10km before he won the last-chance Olympic qualifier in Setubal, Portugal, in June.

The Tunisian led the way for much of the first lap, Weinberger with him all the way and completing the first 1.7km in 18mins 09.2sec, 0.4sec ahead of Mellouli. Weinberger was still in the lead at the end of the second of six laps, the lead group still tight.

Just before the end of the second lap, Germany's Andreas Waschburger became the third swimmer get a yellow warning card after he muscled his way to the helm, impeding rivals as he went. By the half-way mark, Waschburger, on 55mins 47.2sec, Mellouli a second away, the most decorated man in open water swimming, Lurz, was building steam alongside Weinberger just under 3sec off the lead pace.

Benjamin Schulte, a 16-year-old Australia-raised late entry in the Oceania pool and racing for Guam after Kiwi Kane Radford opted out, was four and a half minutes back at the half-way point. He would go on to finish the race last home in 2 hours 03.35.1, his first Olympic experience one he will never forget.

If the teenager appeared to be struggling, so was Britain's Fogg down the back straight past the club house on the fourth lap, falling 21sec off the front swimmers in 22nd as  Waschburger led the way into the penultimate lap 1.8sec up on Weinberger, Mellouli, Giannotis, Lurz, Julien Sauvage of France and Petar Stoychev, the Bulgarian who claimed the world 25km title last year.

With one lap to go, the top four places had been settled, the pool ace had his favourite distance ahead of him, the gold firmly in his sights: though no-one knew for sure that things would stay that way to the end, there was a strong chance that we were looking at history in the making. The open water purists behind the African chased hard over the closing 1km but their bid came too late, Mellouli's lead and pace several strokes too far.

The mill-pond conditions, in about 21C waters, clearly favoured pool swimmers. Had that been an advantage? "Open waters doesn't mean you have to have waves," said Mellouli, while acknowledging: "The conditions were definitely to my advantage. There were no waves and the water wasn't cold, something I was really worried about." Smiling he added: "I come from Mediterranean."

Britain too had played it part, he said, suggesting that the course had more buoys than usual in the 10km to suit the home challengers. "Britain had a good shot with David Davies [the silver medal winner from 2008 who did not make the cut for the 10km this time], Daniel Fogg and Keri-Anne Payne and made it favourable for those guys … there was an advantage for fast pool swimmers," said Mellouli. "That's why I chose the event because I knew that I had more speed that the rest of the field. I based my strategy on that. I attacked the last lap to get into clear water, keeping my stroke long, gliding and as efficient as possible."

"It was an extremely physical race," said Weinberger, who is coached by Canada’s distance freestyle coaching guru Ron Jacks. "That’s why I avoided being in the pack and tried to be on the outside or up there with Mellouli.  I wanted to have a smart race and things turned out in my favour."

Said Mellouli of Weinberger: "He's a tough guy, a tough competitor. When I was talking to Catherine about the race she thought he would be my biggest threat. He's been consistent, so think we'll see more of him in the future."

Weinberger, 22, the early leader, said: "I was laughing to myself finishing those early laps first because most of the way I was usually second and third. But everybody likes to be first and it’s fun to see your name come up first on the splits.”

Two weeks ago, Weinberger won gold at the FINA World Cup 10km in Lac-St-Jean in Quebec. On Mellouli's break to clear water at the end of the 5th lap, the Canadian said: "When Mellouli went out I knew it was going to be hard to catch one of the top milers in the world. I kept my cool and concentrated and told myself it was time to get a medal.  I just moved things along."

To an American reporters suggestion that the US didn't care too much for open water, Mellouli said: "I think you're wrong. Fran Crippen was quite the hero in open water. After Dubai [2010, when Crippen lost his life in a 10km race that change the sport] he became a … legend. When it comes to 10k, you gotta be a hard-working guy. I think they [Americans] take a lot of pride in that." He noted that the 20-year-old silver medallist in the women's race yesterday, Hayley Anderson, was a training partner of his in California.

Mellouli's victory today writes another pioneering and, until recently, unexpected line in the book of one of the most successful distance freestyle swimmers of all-time. A few weeks after the conclusion of the 2007 World Championships - where he won the 800m freestyle crown to become the first Arab ever to win a world swimming title - it was revealed that Mellouli had tested positive for a banned amphetamine at the US Open in late 2006.

Tunisian authorities had known about the positive test but had only given their star swimmer a warning. FINA, the international body, intervened and Mellouli faced a two-year ban. The Court of Arbitration for Sport accepted his explanation that he had taken Adderall, a stimulant and a form of amphetamine, to get himself through studies for an exam.

CAS ruled that he should served 18 months backdated to November 30, 2006, and lose his 800m crown. The timing of that meant that Mellouli, training through his suspension, was able to stop Australian Grant Hackett from winning the 1500m crown for a third time in Beijing. Michael Phelps, of the US, because the first man ever to achieve the triple feat here in London last week.

Asked about the past, Mellouli said: "It was obvious to anyone in the world of swimming that it was just a hiccup, it was a mistake that truly changed me as an athlete and made me aware of my responsibilities. I got my redemption from that in 2008 and this is a different story now." His success in London reflected "years and years of hard work".

Asked if he would now like to play a role in developing Tunisian sport, the polyglot replied: "Absolutely … swimming has been a passion of mine my entire life, sport has been a passion all my life. I would love to be involved in sport back home and swimming." He suggested that Arabs and Africans were not well represented in international federations, though that scenario does not apply to FINA, which was led for more than 20 years by an Algerian until 2009.

The Serpentine, built in 1730, is one of London's iconic destinations and home to the second-oldest swimming club in Britain, dating back to the 1860s. A massive crowd lined the banks to cheer the swimmers on as geese, swans, heron, moorhen and coot flew in for a dip alongside the aliens in their midst. The marathon was introduced into the Olympic programme at Beijing four years ago, though all swimming races were held in open water in 1896, 1900 and 1904.